Flightpath headlined Toronto's Nuit Blanche in 2011, inviting thousands of participants to explore flight as a rapid and emissionless form of urban transportation, in a temporary deployment of urban 'flylines' across the city's central square.

'Flylines' are zip-lines (used in mountainous regions for hundreds of years, delivering food, tools, goods and people) applied to the urban context, acting as an alternative, inexpensive, fast and emissionless form of transportation for people and goods over distances of up to 1 km or longer. Faster than walking, flylines are cheaper and cleaner than buses and, in the appropriate context, easier to implement than cycle lanes. Apart from increasing transportation options, in helping reduce diesel exhaust, flyline corridors could also have significant health benefits.

In Flightpath Toronto, a collaboration with Natalie Jeremijenko commissioned by the City of Toronto for Scotiabank Nuit Blanche 2011, 7 flylines were deployed across Nathan Phillips Square for one night, along with an urban flight school, an interactive visual airscape and a control tower which responded to the voices of members of the public.

The deployment enabled hundreds of people, enwinged, to experience flylines directly and re-imagine the city and the way we move through it.

Though some cities deploy cable cars, zip-lines (deployed worldwide for entertainment and eco-tourism purposes) are comparatively quick to deploy and re-deploy, making them a particularly agile way for communities to experiment with configurations, especially across mobility obstructions like rivers and motorways.

A zip-line consists of a pulley or trolley suspended on a cable, mounted on an incline enabling people or goods propelled by gravity to travel from the top to bottom of the inclined cable by attaching to the freely moving pulley. Zip-lines have been used for transportation for hundreds of years, delivering food, tools, goods and people.

Modern zip lines are typically constructed from stainless steel and other polymers. The simplicity offers several benefits - limited moving parts, high durability, and the use of gravity as a source of power mean that zip lines require relatively little maintenance and are extremely reliable. They can therefore involve people directly in decision making about locations, commuting corridors, cost/health/safety benefits, etc.

Inspired by the birds of Nathan Phillips Square, Flightpath Toronto was a mass-participation spectacle that invited citizens to rediscover the possibilities and wonder of urban flight, with interactive lasers & hundreds of members of the public flying above a public square.

For one night only, the square hosted an urban flight school, an interactive visual airscape, and fly-lines that enabled hundreds of people, enwinged, to re-imagine the city and the way we move through it.

We humans have become accustomed to reading a city in two dimensions but urban birds reveal a city that is fluid and three-dimensional. They pull our eyes through the spaces between buildings, onto inaccessible planes and perches; they show us the texture of the wind, and give us access to an immersive experience of urban natural systems. Birds make visible the very medium we have difficulty seeing and the shared airspace that we need to reimagine.

As well as improving congestion and air quality (with obvious health benefits) Urban Flylines require relatively little capital expenditure - they can be trialled quickly and involve local residents directly in decision making about locations, corridors, cost/health/safety benefits, etc. Remapping would be relatively straightforward as the City changes and develops.

Our innate human desire for unrestricted free flight (evidenced by the constancy of such dreams across time and culture) has become stifled by the practical aspects of mass transportation systems we use every day to get from A to B. Even airplane flight through human airports has become, with all its security theatre and inconveniences, an uncomfortable experience undertaken only of necessity.

In combining the low-cost-infrastructure of flylines with the populist pleasure of thrill, the beauty of aerial movement can demonstrate a radically novel form of urban mobility. Can this fast, emissionless, pleasurable and safe urban mobility propose new possibilities for our shared urban future? This moment in history is a good time to consider collectively other forms of transit, to rediscover the 'sport' in transport, and to excite imaginative possibilities for our shared urban infrastructure.

While zip-lines are an ancient technology, use of them in a non-entertainment capacity in urban areas is innovative and an obvious 21st century innovation, enabling transportation of goods and people quickly and reliably over urban scale distances without polluting. As an urban intervention, it would be important to conduct small-scale trials with both local residents as well as businesses that engage in a lot of local delivery (e.g. local food producers or bakers that need to move bread around early in the morning before passenger volumes increase).

High-points, functioning as entryways to the Urban Flyline system, in key locations would need to be found either at the top of existing buildings/towers, or purpose-built towers could be constructed using the same elevator system employed by the highrise construction industry to carry cargo/passengers up zip-line towers. Urban Flylines would also need an economic model that incentivises goods delivery at night, when passenger volumes are down. 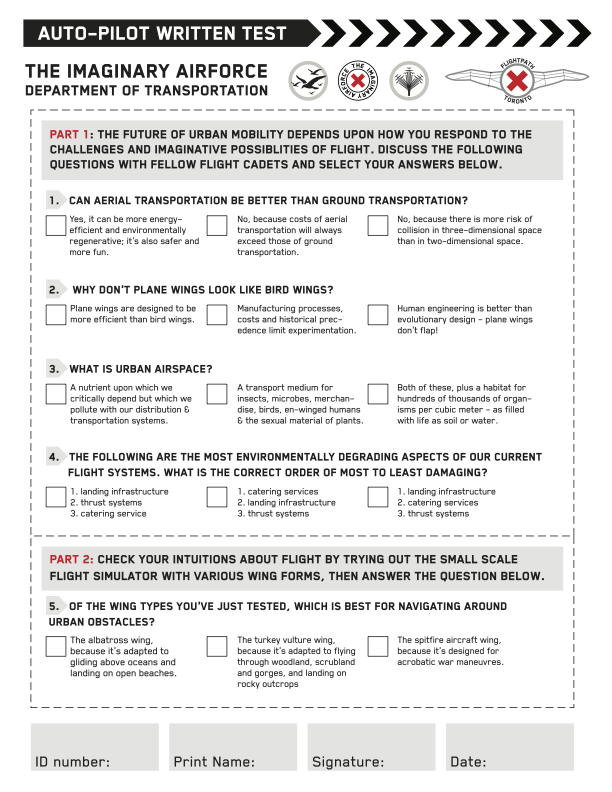 With special thanks to the following for extra-diligent fabrication & site work:

Flightpath Toronto was commissioned by the City of Toronto for Scotiabank Nuit Blanche 2011 and took place on Saturday October 1, 2011.