Our data shadows follow us around - information about us leaks out of buildings, seeps out of our devices and is accessible to anyone with the appropriate bit of hardware or software. In an urban environment that is so data-saturated can a distinction between public and private space really claim to exist?

It is the contention of this project that private spaces are increasingly scarce. All spaces are public, except spaces of absence. If privacy once existed in the home, now such a space no longer needs to be tied to a particular location. 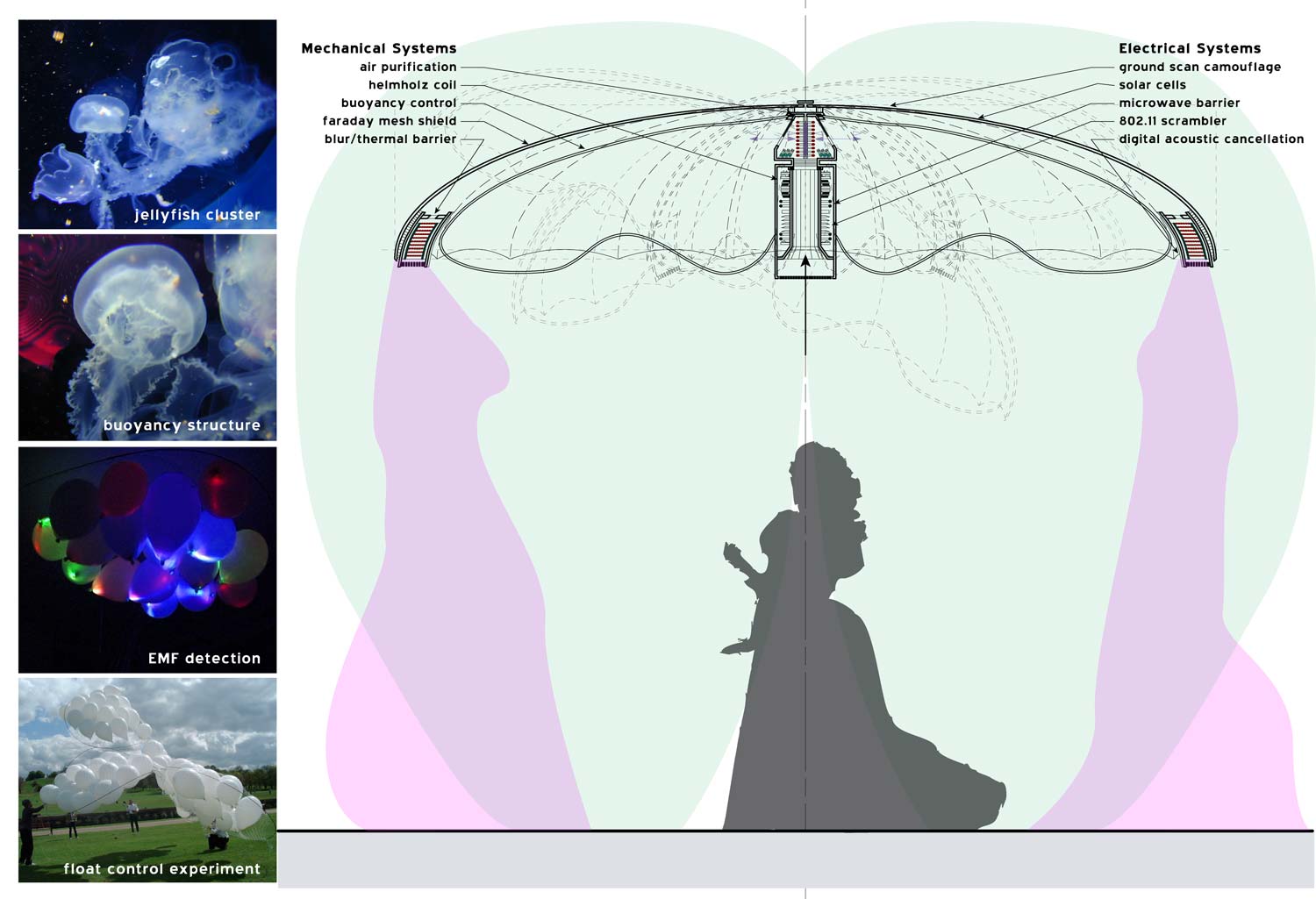 The data that portrays our lives and lifestyles is accessible by so many individuals and organisations that it can longer claim to lie outside the public domain. The fact that there are many individuals and organisations that are not able to access this data does not make it any less public -- the great myth of public space is that it is a space open to all. Public space, whatever the cultural definition, has always sought to limit access - to particular members of a community, particular citizenships, particular genders or particular income groups. In such a situation, what is needed is a truly private space - a space of absence.

What would you do in a truly private space?

The aim of the floatable jellyfish-like vessels that drift around cities is to create temporary, ephemeral zones of privacy - an absence of phone calls, emails, sounds, smells and thermal patterns left behind by others. Through various electrical systems they are also able to prevent access of GPS devices, television broadcasts, wireless networks and other microwave emissions. Finally, by creating a "blurry barrier" and a ground-plane camouflage pattern, they provide shielding from the unembarrassed gaze of security cameras and surveillance satellites.

For many people the vessels are nothing more than a rumour....

Floating around urban environments, in the tradition of architecture that tries to break free from the confines of gravity, the vessels provide fleeting moments of private visual space, auditory space and olfactory space -- occupants can wander in at will when they happen to catch sight of one nearby. The spaces of absence created here are left to be filled with people's own sounds, alpha-waves, smells and laughters...

A moment of respite near to the madding crowd...

The vessels are powered mainly by sunlight and wind but are supplemented by inducted electricity from mobile phones and 802.11 networks (in crowded spaces this amounts to several dozen Watts of unexpended power). Buoyancy is achieved by heating or cooling air in a floatation sac, much like hot air balloons. The entire structure (total weight 4.1 kg) can collapse or expand as necessary to alter surface area in response to wind speed and altitude. The vessels have no particular destinations and drift like flotsam around the city. However, they must keep moving because to be discovered by the authorities means almost certain destruction.

The project first started following an experiment to measure the 3-dimensional quality of a wifi network in my studio. I discovered that I could track the neighbour's data 'shadow' - their wifi network seeping into my space.